You disliked this video. Thanks for the feedback!

Added 6 years ago by vindheim
234 Views
On the 11th of August 2012, I re-visited the Gotland island railway in Sweden.
The crew of No.3 were very friendly and allowed me the privilege riding the footplate over the line. My thanks go to:
Engine Driver: Gösta Hammarberg
Fire Man: Jan Milton
This little 3ft gauge railway runs over a one kilometer section of track opened and run by volunteers.
The island of Gotland once had an extensive railway network. It was completely closed down in the 1960s. In the early 1970s, a group of enthusiast, historians and concerned citizens decided to preserve a part of the Railway for future generations to enjoy. Today the Gotland Railway preservation society run trains along a section reinstated line form a Station which they have fully restored. The station is Hesselby located in the center of Gotland. The original aim was to build the line back to Tule, which is the next station along. The old station building at Tule has already been purchased by the railway and track has been reinstated all the way there with the exception of about one hundred yards which once belonged to a farmer. The land has now been recovered by the railway and the missing section of rails will shortly be installed. See the photographs of this new section towards the end of the video.
On my last visit to Gotland in 2006 only one locomotive was in steam and the railway stopped short of a road and bridge a few yards beyond. On this visit I was delighted to find a second working locomotive and railway extended past the road and new bridge. The new locomotive is No.3 "Dalhem" which has been beautifully restored. Built by Henschel & Son she is a 2-8-0 tank locomotive. She is one of the original locomotives which once worked the passenger traffic on Gotland.
Since my last visit the railway have reinstated a working level crossing and built a brand new new bridge over the river. Soon the railway will be opened once again to Tule. In the future it is hoped to get to Roma a further few miles along the old line.
This is the type of initiative that I would like to see replicated in Trinidad. Sadly, the window of opportunity for this ever happening gets smaller every day.

2013 update from fireman Jan Milton: The extension line to Tule finally opened in December of 2012. 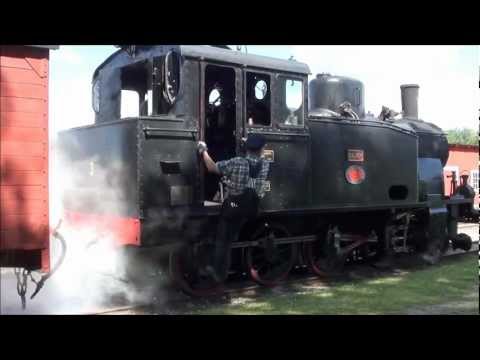 On the 11th of August 2012, I re-visited the Gotland island railway in Sweden. The crew of No.3 were very friendly and allowed me the privilege riding...