Top 10 Richest Countries In The World

You disliked this video. Thanks for the feedback!

Added 5 years ago by vindheim
170 Views
Top 10 Richest Countries in the World 2014
1. Qatar -With less than 2 million residents and about $182 billion GDP, it is no doubt that Qatar is the richest country in the planet. It is a peninsula located in the Persian Gulf, and it is found in the Middle East Asia. The economy of this country is dependent on petroleum, which also contributes to about 85 percent in its export earnings. Other areas that generate income for the country include tourism and banking.

2. Luxemborg-In Europe, Luxemborg is among the most prosperous countries, which is also recognized as a tax heaven. In fact, several billionaires from other parts of the world choose to live in this nation to free themselves of expensive taxes in their native countries. Among the sources of income of Luxemborg include telecommunications and steel industry.
3. Singapore-Another well-off country in Asia, Singapore is an island country that consists of 63 islands. In South East Asia, it is among the four countries with the largest financial centers including Hong Kong, South Korea and Taiwan. The population of this small country is about 5.5 million, and a huge percentage of its locals are Buddhist.
4. Norway-With about 5 million people living in this country and a relatively high GDP, Norway is evidently among the wealthiest countries in the planet. Interestingly, the country shares its border with a few other prosperous nations including Finland, Russia and Sweden. The country's economy depends largely on natural gas reserves and oil.
5. Hong Kong-Located on the southern coast of China, Hong Kong is considered as the fifth richest nation in terms of its GDP. In fact, the country is among the leading financial destinations of investors not only in Asia, but also in the world. While it has its own currency, the defence services of Hong Kong is provided by China.
6. Brunei Darussalam-One of Southeast Asia's richest nations, Brunei has an average annual GDP of $50,400. It generates its income and revenues from natural gas and crude oil exports. Moreover, revenues coming from petroleum add at least 90 percent to the country's GDP. With less than 500,000 living in this country, Brunei is also the least populated countries throughout the world.
7. United States of America-The US is one of the most powerful countries in the world despite several natural calamities and political issues that shook its economy for the past years. What makes the country among the world's richest is its exported goods that include weapons, technology, and a few other services and products. In addition, the US is considered as the largest manufacturer and financial nation worldwide.
8. United Arab Emirates-With an annual GDP of over $48,400, United Arab Emirates is indeed apt to belong in this list of top 10 wealthiest countries in the world. The country includes 7 independent Emirates that are ruled by their own monarchs. At present, it is one of the richest Arab nation because of its GDP that is the third-largest in the Middle East. Among its sources of income include natural gas and oil exports, dates and dried fish. Since there was a depletion of oil reserves in the country, it explored diverse businesses that continue to flourish.
9. Switzerland-Switzerland, a rich nation in the European continent, is among the most prosperous countries in the world. It boasts of its diverse and stable economy, and it has managed to maintain its excellent records in terms of its GDP. What makes Switzerland one of the wealthiest countries is its extensive sources of income such as agriculture, tourism and banking. It is also known as the leading exporter and maker of the finest watches, and well-off individuals consider the country as a financial haven to increase their money.
10. Kuwait-This Arab country has an average GDP of $43,700, which makes it a prosperous nation in the Middle East Asia. As with other rich countries, Kuwait depends on its petroleum deposits for its massive revenues. In fact, crude oil makes up a huge percentage of its exported goods. As much as this country is rich, its population is rather small with only about 2.8 million residents.
According to economists, countries are considered as rich if citizens in these nations earn enough to support all of their needs. These top 10 richest countries in the world are among those who have the highest GDP per capita, with the GDP value calculated and measured in US dollars. In addition, several aspects were taken into consideration in the ranking such as the output value, expenditure value and income value.

Top 10 Richest Countries In The World 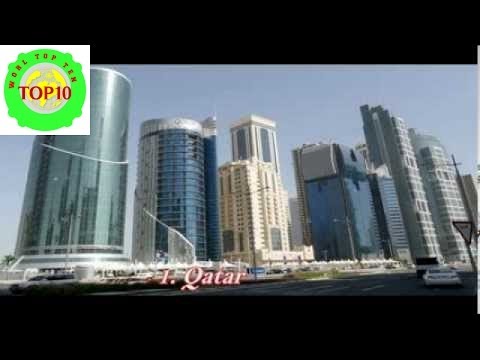